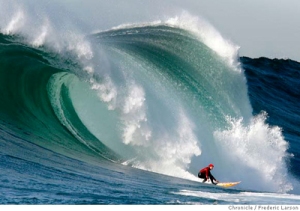 In 1967, three surfers and their German shepherd, Maverick, hiked down to Pillar Point in Northern California, discovering among the biggest waves on Earth, questionable whether they could be surfed?

As the three surfers paddled out into the seemingly impossible, literally risking their lives, they soon realized that Maverick, who loved swimming pools, was beside them, paddling along in the Pacific toward monster waves. Alarmed for the dog’s safety, they promptly returned to shore, tying him up, protecting the dog from his own fearlessness. Then, the three friends paddled out, opting to surf smaller waves off to the side, avoiding the giant waves Maverick was heading toward.

Gradually, word spread about the insanely large waves off of Pillar Point, where till this day, the best big-wave surfers in the world try their luck. …And, so “Mavericks” was named after the dog – an iconic surf destination off of Pillar Point.

However, it can be surmised that the legend of Maverick, the fearless dog, didn’t end with a renown surf location named after him. See, in California surf culture, there’s an acronym, F.I.D.L.E.R, which means, F- it, Dog, life’s a risk. In other words, have no fear, and just go for it – life’s short, so live it.

At some point, I’ve all but stopped having fear, worrying or even stressing about pretty much everything. This doesn’t mean I’m irresponsible or don’t care. To the contrary, I’m ultra-responsible and take what I do very seriously. But, I don’t fear, worry or stress about much of anything. I’m like Maverick the dog – that is, I just go for it.

In a few weeks, I’m saddling up in my power chair and hitting the skies once again – Philly to LA to Vancouver to Phoenix, then back to Philly, with a monster itinerary packed in. And, while my gracious staff has covered every possible arrangement, ensuring that my travels are as planned out as possible, I’m arguably the least concerned. I have my plane tickets, my power chair, my passport and a debit card. FIDLAR – I’m ready to roll! With so much on my itinerary, aspects will go wrong. But, when they do, I’ll handle them. I have absolute confidence in being able to address whatever comes my way. I’m like Maverick the dog, just happy to be paddling into an awesome adventure.

I think about relationships a lot because they are the cornerstone of our lives. And, one key I’ve learned is that feeding unsubstantiated fear, worry and stress into a relationship will destroy it. I mean, if your partner is demonstrating absolute consistent love toward you, don’t question it with fear, worry or stress, but embrace it with security, trust and comfort. If we’re going to experience life-changing love, we can’t question and hold back on an amazing relationship. Rather, we need a bit of FIDLAR in our hearts, and just go for it.

Indeed, we live in a culture where too many hold their lives back based on fear and its corresponding emotions. However, if we want to truly live our dreams – pursue an ideal career, live in the locale we wish, have a breathtaking relationship – there’s only one dog to follow, so to speak, and that’s Maverick. The best opportunities in life are like thunderous, towering waves. Most will fear and avoid them, but those seeking true success won’t back down. Instead, they prove true “Mavericks” by yelling, FIDLAR!, and paddling in the direction of big waves and a courageous heart.