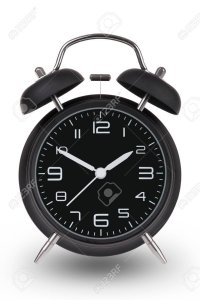 I don’t know what time it is? I guess it’s sometime around 2 a.m. It was mere weeks ago that I could simply roll over or sit up and look at the clock. Not anymore.

I awake several times per night like this now, in pain from not being able to roll or shift positions myself. I lay awake until the pain is unbearable, then I wake my wife. Sweetie, can you please roll me over?

Age, disability, illness and surgery has all taken its toll – and much of my physical abilities and health with it.
I suppose I should be devastated, even bitter toward it all. I’ve had to live with cerebral palsy my whole life, now this – how can life be so cruel?

Yet, I don’t feel that way at all. In fact, I feel the opposite – blessed. No, I don’t want any of this, not the debilitating illness or chronic pain or loss of abilities. But, it’s not my call. It’s aging and illness and life at play. Resenting it all wouldn’t change anything other than adding a self-defeating tail spin to my life. Acceptance is liberating.

My wife is right next to me, touching me, side-by-side. We have a king-size bed, and she insists that I somehow end up on her side no matter what. Yet, in reality, I don’t think she’d want it any other way – close, touching, reassuring, especially now, for the both of us.

Life is about change, and questioning it or resenting it over the long run only defeats us. I’m not saying taking time to acknowledge loss or express our feelings toward adverse changes isn’t normal or healthy – absolutely it is. However, there has to be an expiration date for it, or it will consume our lives more adversely than the actual changes.

I’m to the point where my pain is unbearable and I need my wife’s help rolling over. I gently awaken her, and she softly rolls me over, asking in the darkness if I need anything else?

I answer, no. My answer applies to both the immediate and my life in whole. In the silence of the night, I think about my wife and our daughters and the blessed life I have – and I recognize that I’ve never had more.

Life can be brutal – dehumanizing at its worst, where some of us lose so much at points, we feel that all we are is flesh and bones.

Yet, we push through it – most of us, anyway. Not all. We scrape the depths of our souls for whatever is left, and that marrow revitalizes us enough to start a comeback, following some path, yet to be totally revealed, that we hope will lead us out. It’s never linear, though, is it? We still find glimpses of hope veiled by dark patches. But, we reach and claw, and keep finding our way out.

How long does it take, we ask. Each of our journeys is different, in scale and in time. Months for some. Years for others. A lifetime for a few of us.

I think about this in bed on an August morning at the shore. My wife and youngest daughter are still asleep. I guess it’s around 7:30 am based on the last time I rolled over to check the alarm clock. No shower today. I have no desire for one.

Our daughter stirs, chirping, as we call it when she sings herself awake. I both revel in her adorable character and envy her. I often awake happy, with a tune in my head, but we adults are conditioned not to let it out. Kids are the fortunate ones – free of so many smothering social norms that would bring so much joy if we, too, could just let it out.

We all eventually get up and my wife asks me what shirt I want to wear? We banter about my insistence of a white, spread collar button down. She notes that it’s too wrinkled. I explain that it’s fine for my plans. I’m just going to park myself on the beach. Other events may transpire before or after, but I’m not concerned. A wrinkled, white button down will do. I slip it on, buttoned, over my head. As it slides down my torso, it feels crisp, cool, flowing, perfect.

I roll into the bathroom and turn on the sink’s faucet. I wet my hair with my hands, noting the grey. I run a brush through it several times and I’m good to go for the day.

A white shirt and combed hair were my only concerns, and they’re behind me. I roll over and look out our window to the beach, windless and still. And, I, too, am at total peace starting this day.

“Who’s ready for the beach?” I ask my wife and daughter.

The room is silent. We all know it’s a rhetorical question. 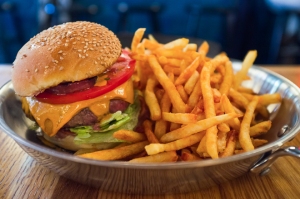 It’s a simple, quiet place. The confusion and struggle of a younger man are long gone. It’s reminiscent of when I look out through the pane windows of our farmhouse on a wintry Sunday morning. There’s something gentle and still about it all – winter and life.

It’s another Friday night and my wife and I are the early crowd at a local restaurant. It’s the kind of restaurant where some go for special occasions; others are regulars, older folks who have dinner there several nights per week. We’re neither. It’s close to home, and despite its higher-end menu, I prefer to sit at the vintage mahogany bar and get a basket of bread, one fine burger, and just be, with my wife. There’s no complexity to it. It’s all comforting – my wife, the food, the atmosphere.

The owner-chef and I have an understanding. We’re acquainted just enough to be on a personal basis. He’ll sit with us and chat. We’ve been open to the degree that we both have shared that we come from families on the other side of the tracks, as he’s politely put it. When you come from that type of family and get to a point in adulthood where you’re no longer running, no longer hiding, no longer out to prove yourself, and you don’t need to worry about being able to pay the utility bill each month, life becomes easy, almost effortless – at least emotionally. So, what’s the key to moving beyond it all, where you’re no longer running, hiding, or proving, but just being, finally at ease?

I’ve come to understand that there are two sides to living with a difficult past: sometimes we hold on to the past and sometimes it holds on to us. Some of us, with struggle, get to a point where we can, for the most part, let go of our pasts. For me, time has equaled distance in that process. The more that time passed, the less my past affected me. Sometimes we can move beyond all in a literal sense by simply moving our lives forward. Education leads to career, which leads to financial security, just as finding love leads to understanding love, and at some point we transcend from what we knew into what we know, all for the better. That’s the key to the best of my understanding of how to change one’s life and leave the past in the past – we realize that we can work to move beyond what we’ve known, into a life of different possibilities, potentials, and outcomes. It’s not easy, but the time-distance equation makes it possible.

On the other hand, when our past has a hold of us, it’s a harrowing plight, as well. We live in a culture that propagates the belief that anyone can “pull oneself up by one’s bootstraps.” It’s not just physically impossible – try pulling on your shoes to lift yourself off of the ground! – but it’s also emotionally impossible when one’s past has its grip. We can’t expect anyone to just get over it and move forward. Trauma is far more complex to heal from.

We know that the healing process is subjective. Of course, the severity of the trauma plays a role, as does one’s psychological and physical health. Where the subject gets tricky is when, say, siblings grow up in the same dysfunctional family and one is able to move beyond the trauma while another continues in its grip. Similarly, in my world, I often see individuals of the same severe injury or illness, but some cope in positive ways while others struggle in a negative space. Therefore, it’s difficult to say who escapes the grip of trauma.

Regardless, it’s vital to have empathy and utmost respect for both plights. After all, both plights involve just as much struggle. We can’t look at someone who’s moved beyond his or her past and say, You’re lucky, because we know the phenomenal amount of work it took. Similarly, we can’t look at someone who’s struggling in the grips of his or her past and say, You’re just not trying hard enough, because we know that’s not how the process works. Again, one only knows what one knows until one knows differently – and there’s no single or direct or surefire route to getting to that point. If you swam across a channel of water, knowing how tough it was to cross, you can’t look at those still in the middle, struggling, with anything but empathy and respect.

My wife and I try to remember if I ordered my burger medium-rare or medium-well? I don’t recall. I simply know that, regardless of how they’re cooked, such burgers taste better than ever these days.