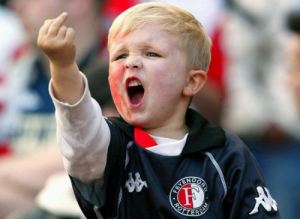 In my neighborhood, none of us kids took anything from anyone. It was where the two sides of the tracks intersected – upper- and lower-class kids intertwined. Neither had much parental guidance. You just never knew where anyone’s parents were. Some were drinking in dark bars in the afternoon, others working in the city in high-rises till all hours, and some straddling both lives. Because of this, in my neighborhood, most kids had free reign from parents, and when out wondering our suburban streets, you didn’t take gruff from anyone.

Being the kid who used a wheelchair didn’t make me exempt from any of it – the dysfunctional home, taking jabs from the other kids or dishing it back. Mostly, though, I kept to myself after school. At 14, I had a lot going on teaching myself to be independent with cerebral palsy. I was three or four years into my mission of being as independent as possible and I saw a lot of progress. My main self-therapy was pushing my manual wheelchair for two hours or so after school every day. The repetitive motion of pushing my manual wheelchair was a sound exercise in strength and coordination. But, I was dismal at it. I’d started a few years earlier barely able to propel across our living room, and by this point, I could make it around our neighborhood. Yet, there was no grace in it.

I pushed painfully slowly. Really, it wasn’t even pushing – pushing implies consistent movement. For me, it was push, roll feet or inches, regather my flailing, spastic limbs and then push again. All that mattered, though, was that I was seeing progress.

As I went out each day, I purposely stayed on quiet streets. I needed to do what I had to do and didn’t want to be bothered. Besides, I never knew if anyone would understand why I was doing what I was doing, and I didn’t want to have to answer any questions. When I was eight, I was in a grocery store trying to buy a pack of gum and an elderly woman made a huge scene that crippled people like me shouldn’t be out alone in public. That experience shook me a bit, and I suppose it made me want to avoid such a scene while out pushing my manual wheelchair, self-aware of how awkward I looked. So, the side streets were my sanctuary, where I could push and progress at my own pace, in solitude.

There was a hill leading to our driveway. It wasn’t the steepest of hill, but long – maybe two blocks – lined by vacant land on each side. It took me a good year to get to where I could push up that hill myself, but I got to where I could do it, although it was forever a challenge, inch by inch.

One afternoon while halfway up the hill, a group of neighborhood kids came up from behind me.

“Need help?” one of them asked as they all surrounded me.

“Do I look like it?” I asked with an attitude, pushing toward a boy standing in my path.

“Yeah,” they all replied at once, laughing.

“Screw you!” I shouted, giving my chair another push, wanting to be left alone.

“Screw you!” they shouted back as they walked in front of me.

“You’ll never make it up the hill, retard,” one kid yelled.

I pushed even harder.

“And I’m going to kick your ass in school tomorrow!” I yelled.

Of course I made it up the hill, and I didn’t kick the kid’s ass in school the next day. I guess achieving one of my two goals wasn’t bad considering the circumstances.

One thought on “Foul Mouth Kids”