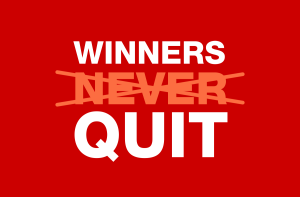 I saw a video of a Little League coach giving his team a pep talk. He rolled out every possible cliché and movie line one can imagine to pump up the kids. These talks work well with 10-year-olds, but not so much for us adults.

See, one of the clichés the coach invoked was, Winners never quit, and quitters never win!

We’ve all heard that saying and it sounds great. However, if we’ve ever struggled, then succeeded at an accomplishment, we also know that that saying isn’t true.

In order to succeed, we do need perseverance, but only in the most successful ways. It sounds great to say, Winners never quit and quitters never win, but such a black-and-white situation is rarely found in life. Perseverance only works when combined with adaptation. If we’re not succeeding at a task, but just keep doing what we’re doing, we’re going to fail. Persevering means constantly moving through that which isn’t working by finding different approaches in order to achieve success. Winners always quit doing that which isn’t working!

I’ve faced a lot of adversity in my life and I’ve always known when to throw in the towel and try a different approach. The key I’ve learned is to be realistic, not dogmatic. I remember going through occupational therapy as a child and was taught single ways to accomplish tasks. However, the approaches, although text-book to the therapists, rarely worked with my abilities, or lack thereof. When I couldn’t accomplish tasks as directed, I simply stopped trying – I quit. Even as a child, I understood the futility of metaphorically beating my head against a wall by pursuing failing approaches. It didn’t mean I was a quitter. Rather, it meant I had good sense. I then pursued other approaches that enabled me to successfully accomplish the tasks and move on to more, arguably to degrees of success greater than my therapists fathomed possible. Winners stop pursuing failing strategies and adopt those that work.

If an aspect of life clearly isn’t working, stop doing it. It doesn’t mean that you’re a quitter; rather, it means that you’re motivated to pursue greater paths. We shouldn’t hold on to that which isn’t working, as like an anchor, it holds us back. I read a great quote that said, “Don’t worry, I’m not quitting. I’ve decided I’m going to stay and make life a living hell while I run this business into the ground…” That’s crazy talk, but many literally do just that!

Quitting is, in fact, a part of the path to success. After all, some kids quit baseball for music lessons – and rock stars are made.