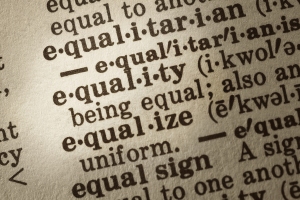 At this writing, it’s the 25th anniversary of the Americans with Disabilities Act (ADA) – and if you’re among my readers who thinks it doesn’t pertain to you because you don’t have a disability, then you should especially keep reading.

See, the ADA isn’t merely about ramps and access to public transportation, but it’s literally civil right legislation. Its intent is to protect those with disabilities from all forms of discrimination. In so many ways, it’s an add-on to the Civil Rights Act of 1964.

The most sweeping civil rights legislation since Reconstruction, the Civil Rights Act prohibits discrimination of all kinds based on race, color, religion, or national origin – but it doesn’t include disability. Hence, in part, the ADA.

In this spirit, on the 25th anniversary of the ADA, I don’t see it merely as a milestone toward social inclusion of those with disabilities, but an opportunity for larger questions: Can we legislate acceptance, and what’s the ultimate solution to civil rights for all?

I’ve spent about half of my life both pre- and post ADA. Yes, I’ve seen vast societal shifts in inclusion and infrastructure toward the positive over the past quarter century via the ADA, just as I’ve seen greater acceptance of all so-called minority classes. The United States is a far better place post the Civil Rights Act and ADA.

However, I personally still encounter those who stereotype me and, yes, the occasional instances of discrimination based on my disability. And, I’m not alone. From in our personal lives to watching the nightly news, who among us doesn’t still witness racism, sexism, antisemitism and every other labeled form of discrimination we’ve ever had?

I hear rumblings from the local diner to Capitol Hill that the remaining solution to prejudice and discrimination is additional legislation. However, there’s really only one ultimate solution.

As much as we see civil rights as a societal issue, it’s not. Rather, civil rights is a personal issue, and it’s ultimate solution is found within each and every one of us. Yes, we can legislate public policy, and rightfully so. However, we, more importantly, must engage our minds and open our hearts, to where civil rights isn’t just an ethical societal concern, but more so a personal moral standing, where we simply see all others as equal as ourselves.