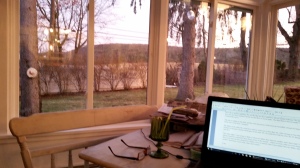 Whose woods are these I think I know. It’s the eve of my 46th birthday, and from the kitchen table – my in-laws marital set from 50 years ago – I look off past a pasture, into the rolling hills of woods. The glassed-in room makes such a vista easy, and it’s different not just from season to season, but from morning to eve.

A glass of wine sits on the table, and it’s alright. It’s all alright now.

My wife is upstairs painting. No, not the fine art she’s trained in, but our master bedroom. We sprung to have the first floor painted, but the second floor is sweat equity. The third floor is her art studio. It wonderfully just is.

The sun is setting on the hills of woods, and the reds and greens of the trees are incredibly vibrant for March. Some sort of evergreen trees, I imagine.

The other night, I was trying to think of when my father died, then my mother, and I don’t recall. I’ve always heard that we remember these things down to the second – where we were, what we were doing. But, I just don’t. All was strained for decades, lives in turmoil, then it just ended, first my father, then my mother. Sometimes it just ends; dates don’t matter.

I check on our eight-year-old in the adjoining family room. She’s watching the Muppet Show, and I start the fireplace as the sun sets. Our oldest turns 20 the day after my birthday, and won’t return home from college for another two weeks, spring break. She hasn’t seen any of the paint in person. There’s always progress on the house that we’re excited to show her. Nuances discovered from its 1828 roots to changes we’ve made. It’s home now – ours.

Robert Frost, among the “New England poets,” captured rural settings like this in his work. I think of “Mending Wall,” where, in the spring, my 2daughter and I, too, will stroll our property lines, resetting stones on walls and placing pieces of the old timber fencing back on its hand-carved posts.

I could tell you how I got here, 46, my wife, the kids, the house, the rolling hills of woods. But, the beauty of life isn’t just the growth from where we stem, but the promise of where we’re going.

4 thoughts on “Miles to Go”