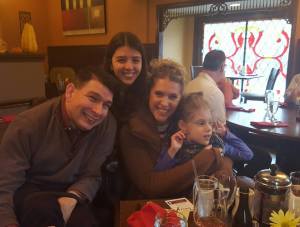 The philosopher, Laozi, founder of Taoism, asserted, “When I let go of what I am, I become what I might be.”

How many of us have felt trapped in our existence at points in our lives, where circumstances dictate who we are? So much of our lives can be painfully defined by such aspects as our physicality, our family history, our socio-economics, and what’s projected upon us. I know, as I’ve spent my whole life as “one with cerebral palsy,” where from the moment of my birth, I was told what I am. If we go back in time, or even today, as some may still see me, seemingly incapable on realms ranging from the physical to the mental. And, in some ways, they are right. After all, as one with cerebral palsy, my wife does help me on and off of the commode, and, no, I can’t physically even write my own name.

I could have spent my whole life buying into what I am. We all could, no matter our circumstance or situation. However, there’s nothing to gain by buying into “what we are.” Rather, we have everything to gain by striving toward what we might be. I often recount the story of being thrust from an institutionalized school as a seven-year-old to being one of the first publicly mainstreamed students with a severe disability in the U.S. I had no support, but I did have two choices: I could be the child with severe cerebral palsy who many thought belonged in an institutionalized school – after all, that’s who I literally was. Or, I could push toward who I might be – that is, in my young mind, a “normal kid in a normal school.” Everyone knew what I was, but few believed in who I might be. At seven, I didn’t know who Laozi was, or even the gravity of what I was pursuing. The power of the human spirit drove me toward who I might be.

Here’s the key that I now realize: no matter where we find the courage, consciously or intuitively, we must believe in our power to rise above what we are in order to achieve what we might be. I know it’s hard. In ways, it’s easier as a child because the human spirit is naive to how brutal life can be. As adults, time can wear on us – broken and battered. Toxic relationships, dysfunctional upbringings, social pressures, and on and on can all weigh us down, teaching us what we are, in ways that defeat us instead of inspiring us. There was a period in my 30s where I looked in the mirror and saw what I was: a divorced, full-time single dad with severe cerebral palsy. That’s a grim prospect on the dating scene. What woman would ever take on that mess?

But, that wasn’t what I had to be. What I might be is a loving father, and a man who grew and learned from his past marriage, where life-long cerebral palsy instilled in me attributes of perseverance, self-confidence and empathy toward others who’ve faced adversity. Who I might be was once again what I looked toward, and while change didn’t occur overnight, it led to finding my wife and a second daughter, where my life has remained on an empowered, blessed trajectory encased by love for years now.

See, whenever we find ourselves trapped or discontent with what we are, it’s an opportunity to pursue what we might be. We don’t have to settle for where we’re at. We can strive toward what we might be. Is it easy? No. Is it scary? Yes. Might we fall short in the attempt? Absolutely. Yet, as one who’s found himself at such crossroads many times, indeed, it is only when I’ve let go of what I am that I’ve moved closer to what I might be.