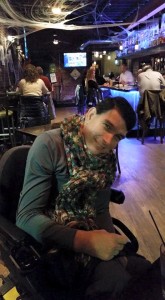 Being somewhat of a public figure, I recently was engaged in a several-day online banter with an individual being very critical of me, to the point of irrational. Still, I felt the need to respond to his criticisms. For one, I didn’t want false statements about me left unaddressed in a public forum, and secondly, I was trying to be respectful and not ignore the individual. I didn’t take it too personally, but I also didn’t just let it emotionally go – and logistically it consumed a lot of time. However, I finally realized I didn’t deserve to be treated that way, and I didn’t care what else was said of me – and I simply ceased the unhealthy dialogue. I know who I am, I know what I do, and I’m proud of it all, so there’s no need to waste time with concern over others’ opinion of me – good or bad.

Most of us have been in this type of predicament, sometimes more serious than others, right down to abusive. I mean, maybe you know what it’s like to be inappropriately criticized, judged or condemned by others. And, it’s most painful when it’s by those who claim to love us. Something as small as a comment like, “You’re not going to wear that, are you?” after we’ve gotten dressed up can sting. Of course, situations like when parents stop talking to a child because he or she came out as gay can crush. From tiny comments to huge judgments, it all just hurts, doesn’t it?

But, there’s a way to stop it all, to take away the pain – and, more importantly, remove the power of others from effecting us. We need to realize that, if we’re good people, living good lives, no one has the right to criticize, condemn or judge us, period.

As I grew up with a severe disability, it was always in the back of my head whether others would accept me? This insecurity extended well into my adulthood. Granted, I was really good at concealing it, where self-confidence was a mask I wore. However, in my 30s – and it’s unfortunate that it took me that long to come to such a simple truth – I realized that I was to be accepted as I was, and I didn’t need anyone’s approval toward my having a disability. It’s really a brilliantly childish life strategy: I don’t need anyone to accept me because I don’t accept anyone who doesn’t accept me. It’s my ball, and if you don’t like the way I play, then I’m taking my ball and going home!

See, the prize is in you and me, not those who criticize, condemn or judge. I’ve run into several circumstances where friends have come out as gay to their parents, only to be shunned. Again, imagine how painful it is to have your parents shun you. However, who should shun who in such a circumstance? It’s painful and hard, but a child needs to say to his or her parents, I’m your child and I deserve to be loved as-is, and guess what, folks, until you love me as I deserve, you’re going to have an empty chair at the dining room table.

Life and relationships are full of compromises, but our intrinsic value isn’t. We shouldn’t live to others’ criticism, condemnation and judgment. I know, it can be hard to break free of investing in what others think of us, especially when it’s gotten to a toxic level in family dynamics and relationships. Yet, we owe it to ourselves to be our own cheerleaders, champions of the self, where the only opinion that counts is our own, based strictly on the positive, meaningful lives we lead.