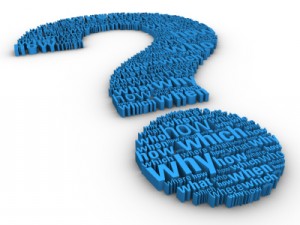 If you ask my colleagues what I’m most known for in our interactions, most will tell you, asking questions.

It’s true. Most of the time I leave my office, it’s to go ask someone a question. No, not ordinary questions, but usually ones that make us both think, further question, and explore a topic – and ideally find innovative solutions. The result is that we both not only learn, but we often discover insights into improving our company and its products and services in some way. What I’ve learned is that great ideas rarely just happen; rather, they begin with a single question – the whys, hows and what-ifs?

For me, having lifelong cerebral palsy has taught me a lot – invaluable lessons that I’ve grown to recognize outweigh the intrinsic challenges. And, among the greatest lessons has been to never accept any presented limitation, but to question it, the whys, hows and what-ifs that move me beyond it. The fact is, in order to succeed with disability – and in all of life! – you have to be a master problem solver, and it all begins by questioning what is in order to get to what can be. No one needs to be a rocket scientist or super hero to overcome seemingly insurmountable obstacles. One merely needs to question a seeming status quo until an action-based solution is found.

I work in the power wheelchair industry, and over the past nine years, multiple Medicare funding cuts have impacted mobility access for those most in need. At this writing, another cut is waiting in the wings, and so a petition was started by a small group in our industry, where 100,000 signatures were needed within 30 days to have the White House consider the issue – a possible stop to the cuts. Unfortunately, the petition failed, with less than 30,000 signatures.

As a result, I’ve been hearing mumblings from some that the failed petition just proves that those with disabilities don’t care what happens to mobility funding.

What I haven’t heard is anyone ask a vital question: why aren’t those with disabilities more inclined toward advocacy? If you want 100,000 signatures, the answer to that question is key.

So, I’ve been exploring that question – why aren’t those with disabilities self-advocating to a successful level? – and that single question leads to profound causations and solutions. See, statistics tell the real story:

When we follow those series of questions, it becomes evident that those among us with disabilities aren’t involved in advocacy and the political process because we’re among the poorest, least educated, and ultimately disenfranchised groups. Yet, the questions also reveal to me a solution:

If we want to have a culture of solidified disability advocates – and more importantly, socio-economic equality – we need to skip petitions for now and address the root causes. We literally need to focus on programs that help high school students with disabilities transition from high school to college, then college to the workforce. Once you have a population succeeding, not just surviving, then you can have a galvanized constituency.

Now, I’ve just taken you on a wild ride where a single question led to profound issues and vital solutions. But, that’s the eloquence of asking questions – you never end up where you started. In our relationships, in our careers, in our hearts, if you want to grow in any way, start with a question. It’s not My relationship is struggling; it’s Why is my relationship struggling? It’s not I’m dissatisfied with my career; it’s What would I love to do? It’s not I can’t do it; it’s What if I try this? We need to have the courage to ask direct questions that all but force us to act.

Indeed, questions are the sparks that don’t just ignite areas of our lives, but possess the power to change them.

2 thoughts on “What’s in a Question?”