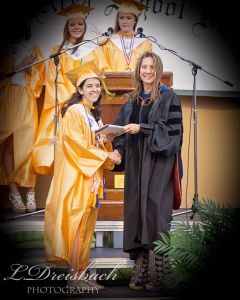 At this writing, my daughter graduates high school this eve. She’s the second to do so in our family’s history. I was the first. Great grandparents, grandparents, my parents, aunts, uncles, no one on any limb of my family tree graduated high school.

However, it’s not like everyone doesn’t try. You start out with all of the hope in the world as a child , but in a realm where we know that cycles of dysfunction are so complex – right down to aspects like addiction having a genetic component – it just gets a grip on you, tough to escape as you hit your teens, your adulthood. I know – I’ve been there.

My daughter’s mother came from a family history of addiction, as well, and not with bitterness or anger or resentment, but with sadness, I watched her fall into the grips of addiction. They say that if you come from a family of dysfunction, you’ll either become it or marry it. Ironically, as 27-year-olds, with our daughter born, my ex-wife and I thought that we’d broken the cycle – we didn’t drink, both went to college, and life was on track.

However, as my daughter hit her toddler years, life went off of the tracks, and my ex feel into a life of mental illness and addiction compelled by her troubled upbringing – while I don’t believe in excuses, I do have empathy for reasons. Again, you can’t fault trying.

As the vortex swirled in our family, I consciously chose to swoop my daughter out. We all were in the generational cycle of dysfunction – my ex-wife became it, I was married to it, and, most disturbing of all, my daughter was growing up in it.

Soon enough, my daughter and I were on our own, my sister a major source of support. And, as my daughter grew, thriving year after year, I was both inspired and scared to death. After all, I was the only person I knew in my family tree to stay on the track during high school, and my worst fear was that my past, her mother’s past would become my daughter’s. Yet, as she grew into a young lady, like watching a thoroughbred round the bend, she never skipped a beat. I can’t count how many of her plays, band concerts, honors clubs, and so many other functions I went to. By 2013, she was named among the top 250 youth scholars in the country, and simultaneously was awarded a scholarship to a summer performing arts program for the top youth musicians in the world – literally. And, all the while, I watched not just with a father’s pride, but awe-inspired by what a person can accomplish with dedication, ambition and passion.

Tonight, my daughter will be among the most honored graduates in her class, her gown decorated with more honors – a stole, multiple awarded cords, so many award pins that my sister had to strategically align them – than I ever knew existed. And, as she walks across the stage, she won’t be the second to change our family tree, after all. No, she will be the first.

See, what I’ve witnessed through my own plight, and now my daughter’s, is that it’s irrelevant where we come from. From a lineage of addiction, poverty, incarceration, illiteracy, and mental illness, none of that crosses the stage with my daughter tonight. My daughter, it proves, will cross that stage as each of us can, where the only legacy her life carries is that of her own – and it’s amazing.