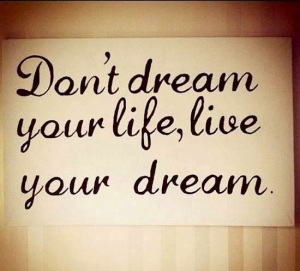 Walt Disney said, “All of our dreams can come true if we have the courage to pursue them.”

He was right, but only partially. See, his understanding of how dreams truly become reality was incomplete – that is, there’s an addition to his eloquent words that must be added to shift them from inspirational to achievable: “All of our dreams can come true if we have the courage to pursue them, and as long as we are flexible, willing to adapt our vision as circumstances dictate.”

I know a lot of people – me included – who’ve lived their dreams, but none have achieved them by adhering to a single, fixed, idealistic vision. Life and success simply doesn’t allow for an easy Point A to Point Z dream-come-true path – there are a lot of twist and turns along the way. And, dreamers who succeed know the importance of remaining flexible and adapting along the way.

A dream begins as a wish, a want, a desire or a need, and always has a specific outcome – very specific. A high-school student dreams of being a professional football player in the NFL. Newlyweds dream of buying the perfect house. A CEO dreams of having the top company in his industry. A woman in her 30s dreams of meeting Mr. Right.

Now, by nature, such dreams are rigid. That high-school student’s only foreseeable result is playing in the NFL. The newlyweds know exactly what their dream house looks like. That CEO has an exact dollar figure in his head. That woman in her 30s has a list of all of the characteristics that her Mr. Right possesses. They’re all linear, inflexible, singular outcomes. However, again, although we cement such rigid dreams in our minds, it’s a contradiction to how life plays out for even the most focused, fortunate people.

Therefore, if dreams set in stone are unrealistic to begin with, why have them, and isn’t any dream then a set-up for failure?

Not at all. In fact, with flexibility and adaptations, the core aspects of our dreams are always achievable, ultimately resulting in at least some form of what we wished – and sometimes even more. I personally know each person in the examples I’ve given and they exemplify how flexibility and adaptation has allowed them to live the core values of their dreams – and achieve them.

The star high-school football player was paralyzed from the chest, down, six years ago. The injury, of course, could have destroyed his dream of playing in the NFL. Yet, it didn’t. No, he won’t be suited up on the field, but he’s now in law school becoming a sports agent.

The newlyweds couldn’t afford the new custom home they wished, but bought a fixer-upper. With a little paint, handywork and sweat, they’ve created a home they absolutely love.

The CEO’s industry went through a 5-year downturn, but he reorganized and refocused, and he’s arguably now at the top of his competition.

And, the 30-something woman is madly in love and engaged to a man who’s three inches shorter than her – a trait that her tall, handsome Mr. Right was never supposed to have.

When it comes to my friends’ original, rigidly envisioned dreams, you could argue that, per Walt Disney’s outlook, they failed, never achieving the exact dream. Yet, their plights prove that with flexibility and adaptation, the core values of their dreams were totally achieved.

Let us not be boxed in by our dreams but inspired by them. If you hold on to a single vision too strongly, your dream will be destroyed by the first twist life introduces. Instead, let a dream be the inspiration to seek what you wish, and loosen its reigns to shift as needed. Dreams are like seeds planted – as they germinate and grow, follow them with flexibility and adaptation, where the ultimate dream realized is almost never quite what you envisioned, but often proves more successful than you ever …well …dreamed.

One thought on “Let Dreams Go”