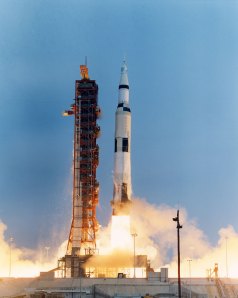 Anyone who saw the movie, Apollo 13 – or never saw the film! – knows the iconic phrase, Failure isn’t an option.

Indeed, the phrase is inspirational and catchy, now part of our motivational lexicon. However, here’s what few know: Not only was the phrase a fictional creation for the film and book, but it was derived from the NASA Control Room philosophy that really meant that quitting was never an option.

See, the catch phrase was skewed from an interview where Apollo 13 flight controller, Jerry Bostick, said, “…When bad things happened, we just calmly laid out all the options, and failure was not one of them. We never panicked, and we never gave up on finding a solution.”

Truly, what Bostick expressed was that failures – or, in his words, “bad things” – occurred all of the time, but what the flight control team did was never quit, they never gave up on finding solutions. They wouldn’t accept a failure as an end-all.

That’s such a vital distinction: Failures are bound to occur in virtually all that we do. However, quitting in the face of them is not an option. In fact, among the greatest people and accomplishments have always been born from huge failures. Babe Ruth struck-out 1,330 times. Henry Ford went broke five times. Jack Canfield’s Chicken Soup for the Soul manuscript was rejected by 140 publishers. James Dyson’s vacuum had 5,127 failed prototypes.

Of course, these catastrophic failures lead to among the greatest success stories in history. Babe Ruth, is arguably the greatest baseball player of all time. Henry Ford revolutionized manufacturing and the automobile. Chicken Soup for the Soul has sold 130 million copies. And, the Dyson vacuum became a market leader, changing its industry.

As Confucius put it, “Our greatest glory is not in never failing but in rising every time we fail.” As Samuel Beckett put it, “Ever tried. Ever failed. No matter. Try again. Fail again. Fail better.” And, as President John F. Kennedy put it, “Only those who dare to fail greatly can achieve greatly.”

All of these great men – as well as all wise individuals – know that failure is part of the path to success. Learning always involves failure – it’s why students study, athletes practice, and businessmen develop. Failure is “practice making perfect.”

Now, I’ve outlined a few extraordinary examples of huge failures leading to astounding successes. However, failure – and how we address it – plays an even more important role in our personal, everyday lives. If we fail, and quit as a result, we lose everything, it’s game over. Yet, if like the greats that I’ve previously noted, if we fail, but keep striving, finding new approaches and solutions, learning and growing, we will ultimately succeed. No matter if it’s my two year-old niece who was frustrated by a baby gate, so she used her toy box as a ladder to climb over it, or my friend who went on over 30 job interviews before landing his dream job, both experienced failure after failure, but followed through with a tenacity to success.

As for me, my life remains one big failure. From my daily living skills, to my career, to my relationships, to my parenting, truly, there’s nothing that I haven’t failed at. Heck, I’m failing at this very writing as I create the first draft (by the time you read this essay, I will have failed with four or five drafts). But, I don’t give up, ever. There’s nothing too physically tough, too intellectually challenging, to financially burdensome, too emotionally harrowing for me to ultimately succeed at. Sure, again, I will – and have! – fail at many aspects of life, unquestionably many more times to come. But, failure doesn’t scare or deter me; rather, failure drives me to push harder. Through failures, I learn, I grow, I adapt, I change my approach, and eventually I succeed. I’m going to fail, but in that process, I know that I’m moving closer to success.

I don’t know what challenges – read that, failures – you’re facing in your life right now. However, try shifting your perspective to a mode where you see failures as direct paths toward success. Does it take perseverance? Yes. Does it take determination? Of course. Does it take patience? Sure. But, does it ultimately lead to success? Absolutely. After all, without failures, there is no success.

One thought on “Failing Greatly”