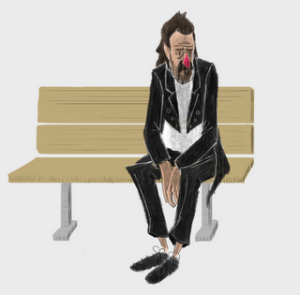 I know better than to answer a question with a question because it’s a sure sign of guilt to those trained on how to spot a liar. But, I couldn’t stop myself from replying to the cop, “Do I look like I’ve been drinking?” – namely because I really wanted to know if I looked like I’d been drinking?

This predicament started with the Brightree party at Medtrade, the semi-annual trade show for home medical equipment. Friends of mine were going to the big Brightree software company bash, and I’d gotten to know Dave Cormack, Brightree’s CEO, a bit, so I was on the party list. And, I rolled into the party with a splash – the only person using a wheelchair – and I immediately landed on the dance floor with Dave and countless lovely women, dancing the night away to a live band.

By 10:00pm or so, I’d had my fun for the night, and headed back to my hotel via the then-empty streets of downtown Atlanta. Now, Atlanta’s downtown is pretty safe, but sketchy characters pop-up from time to time, so I was on guard – full speed ahead – racing back to my hotel, alone in my power wheelchair. And, I was well on my way, no cars or creeps, when I made it to the main intersection crossing that separates downtown from Centennial Park, me from my hotel.

As I reached the intersection, cruising on the sidewalk with the direction of traffic, I caught the green light, and crossed the street, high-tailing it up, into the park, which allows through-traffic. But, there was no traffic; just me, racing up the dark sidewalk. And, then the flashing lights hit me, followed by an amplified voice on a loud speaker: “Stop where you are!”

You have to be freakin’ kidding me, I thought. I’m being pulled over, on the sidewalk, in my power chair, by a cop? Really?

So, I stopped, and the cop stopped beside me at the curb, and got out of his car – lights still flashing.

“Do you know why I’m stopping you?” he asked, walking up to me.

“No,” I replied, turning my wheelchair toward him.

“You illegally crossed that intersection,” he said, eyeing me up and down.

“No,” I said. “I crossed in the crosswalk, on a green light, with the direction of traffic.”

“I didn’t see a pedestrian sign, but I clearly followed the light,” I replied.

“Where are you coming from?” he asked, pulling out his note pad.

“The Tabernacle,” I replied. “I’m in town for a sort of wheelchair trade show, and one of the companies had a party tonight.”

He wrote something on his pad, then asked, “Have you been drinking?”

“Do I look like I’ve been drinking?” I asked.

Surely, I now realize that it was the worst possible answer that I could have given the cop. But, it was my sincere thought in the moment, where I really wanted to know if I looked like I’d been drinking? Was my tie crooked? Had I weaved while driving my power wheelchair up the sidewalk? And, with my cerebral palsy, how could the cop, a stranger, know if I’d been drinking, anyway? My speech is always slurred, and I always look… well… drunk. I mean, sure, my wheelchair gives me away as disabled, but take away the wheelchair and set me on a park bench, and my posture, movements, and speech instantly appear every bit of a wino. Drunk? Cerebral palsy? Who’s to know? How could the cop know?

Then, in an instant, my instinctive curiosity turned to rational thought, and the devil on my shoulder said, You basically just told the cop you’re drunk – idiot!

But, I wasn’t drunk, and lucky for me, the cop actually laughed at my reply. Close one – dodged. I crossed on a green light, I rode on the sidewalk, and I wasn’t drunk. Winning!

“Where are you heading?” he asked.

“The Embassy Suites,” I replied. “My hotel.”

“Well, from now on, make sure that you follow the pedestrian signs,” he said.

The cop walked back to his car, I headed toward my hotel, and he slowly followed me with his lights on for a block – presumably still looking for signs if I had cerebral palsy or was a wino.

3 thoughts on “Wino on a Bench”