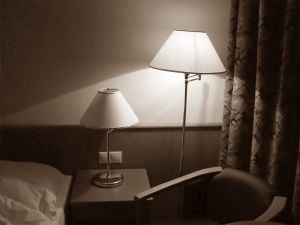 I lay in this hotel room bed – alone – thinking of Vic, who committed suicide almost 22 months ago to the day.

This evening, I spoke to a group of around 170 people, half-way across the country from my home – and I knocked ’em dead, as they say in show business. It was my kind of event – dinner and cocktails – where I have the liberty of really working a festive crowd. And, I hit it home with a theme of following the ramps in our lives – bridges of opportunity that take us to places we never dreamed – by interweaving stories from the humorous to the poignant. And, the gracious crowd was with me all along – an exchange of amazing energy – and then I rolled off stage to their flattering standing ovation.

At the time of Vic Chesnutt’s suicide, many chalked it up as the quadriplegic musician who was tired of living with the daily trails of disability, that the physicality of it all caused him to take a fist full of muscle relaxers, mix a dangerous cocktail, and check out for good – his fourth and final suicide attempt. But, as I wrote at the the time, there was more to the story than that:

…From what I knew of Vic, from what I’ve since learned of Vic, and from what I’ve witnessed and experienced in my own life, I believe that the unique pressures of living ultra-successfully with disability caught up with him, where he wasn’t able to cope with the extreme fluctuations in his life. See, when you have an exceptional level of success like Vic did while living with a disability, it can become a tale of two cities. On the one hand, publicly, everyone’s telling you that you’re a huge success and inspiration, putting you atop the world. Yet, on the other hand, you’re a real person, with real-life issues toward health, relationships, and finances. And, when all isn’t kept in balance, you can go from extreme highs to extreme lows in literally a matter of moments – in the time it takes to go from on-stage in front of a cheering crowd to a lonely hotel room where you’re left to face the realities of your everyday life. Truly, when you have such extremes in life – and you’re emotionally unable to center yourself – it’s just as easy to get consumed by the lowest of the lows as the highest of the highs, where the healthy middle-ground needed to survive doesn’t exist. And, that’s where the tragedy in Vic Chesnutt’s life occurred – not in his literal disability, but in his inability to find that middle ground of understanding and comfort in life as a whole, where, by all accounts, he lived a tormenting oscillation between the highest heights of elation in his work, and the deepest plunges of despair in his personal life, with no middle ground to just be at peace.

My colleague and I leave the banquet after the program’s finished. I thank our host for the engagement, and I convince my colleague to go across the street with me to an eatery for a late night snack. Again, going from a stage to an empty hotel room can be torturous – there has to be a bridge in-between to help one transition from the energy of a packed house to being totally alone. And, by getting something to eat, I’m stalling – buying my time, avoiding the empty hotel room in which I will inevitably find myself. But, I can get through it – alone, the hardest part of it all that Vic knew too well.

Eventually, I make it to my room like countless other nights on the road. I lay in this hotel room bed – alone – thinking of Vic, who committed suicide almost 22 months to the day. And, I realize that everyone’s assumptions of Vic’s suicide truly were wrong. See, as I stare at the shadow of the drapes in the dark, I know that the challenge for guys like Vic and me isn’t being alone in our disabilities; rather, the challenge is being alone in ourselves.

2 thoughts on “Staring at the Drapes”