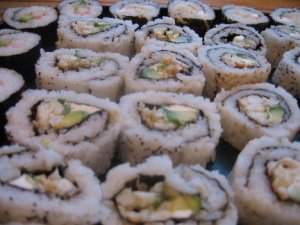 I wasn’t the least bit uncomfortable about it, nor was she. See, there I was, all dressed up to give a talk in front of a corporate group, but I was presented with a pre-talk lunch served by our gracious host, consisting of sushi rolls. I knew from the very sight of the rice-covered sushi rolls that, due to my poor coordination, there was no way that I could get them from the table to my mouth without rice and who knows what else ending up on my neatly-pressed pants….

So, I had two choices: One, I could simply not eat; or, two, I could have the courage to ask for help.

Fortunately, my asking for help was easy in that instance based on the fact that a dear colleague of mine was with me, who’s traveled with me quite a bit, so asking her for a helping hand was natural. What’s interesting, though, is that getting to that comfort level – where I could turn to my colleague and say, “Would you mind feeding me my sushi, so I don’t get it on my clothes?” – took time and candor to evolve. On her part, my colleague’s sincere, genuine nature has been touching, and she’s proved truly intuitive in getting to know me as a person, disability and beyond – all of which speaks to the exceptional qualities of her character. However, I’ve likewise have had the openness not to hide any of my vulnerabilities – the realities of my disability – from her. She knows that I drink through a straw, I squirm in airplane seats to shift weight off of my rear, and can be a bit messy when I eat, and on and on. I am who I am, and I trust that my comfort in living with my vulnerabilities – where I don’t display only the so-called best of me, but the true me, flaws, spasms, and all! – has likewise made her more comfortable. None of us are perfect; we all need help at some point in our lives. And, allowing others to see our vulnerabilities is a positive trait, one that unifies, where asking for help and helping others is an inspiring exchange. We don’t get through life alone, and sharing our vulnerabilities is a key that we all need in living a life that allows us to truly connect with others in the most genuine ways.

Interestingly, researchers scoured the globe for the one aspect that most connects us with others – that is, what forms the deepest, most meaningful relationships on all levels? – and allowing ourselves to express our vulnerabilities topped the list. Vulnerabilities, it proves, are only weaknesses when we won’t admit them. However, when we admit our vulnerabilities, they become strengths because we’re showing ourselves to others in the most genuine ways – and that forms the most open connections with others, the sincerest relationships.

Addiction and recovery proves an enlightening study in how vulnerability can kill us or liberate us – sometimes literally – all based on whether we admit vulnerabilities. For example, an addict in the clinches of use, will never admit vulnerabilities. An addict won’t admit to causation, won’t express genuine feelings, will try to justify even the worst decisions, and will lie about everything under the sun, including lying to his or herself. That is, addicts run and hide from vulnerabilities via substance abuse – and, at best, it disconnects them from meaningful relationships, and, at worst, it literally kills them.

However, recovering addicts do just the opposite – they admit and address vulnerabilities. Think about the first words spoken by everyone at an Alcoholics Anonymous meeting: I’m Joe, and I’m an alcoholic. Admitting the vulnerability of addiction – that is, being honest and candid – liberates and connects. There’s remarkable empowerment in it. And, when getting into deep models of recovery, acknowledging the vulnerabilities that lead to the addiction – past traumas and such – is yet another way of profound recovery. That is, the only way addicts stop using is by acknowledging and addressing the underlying vulnerabilities that cause the addictive behavior in the first place.

In our personal lives, hiding behind our vulnerabilities – or, denying them through self-justification – is extremely dangerous, defeating so many potentials in our life: I’ve been hurt in a past relationship, so I’m not going to trust anyone again…. I don’t want to be seen as weak, so I’m not going to apologize…. I’m not going to show all of me because others will judge me…. Really, what such a closed emotional state says is, Overall, I’m going to self-sabotage meaningful relationships because I’m so scared to reveal my vulnerabilities – my complete self – to others.

It is astounding how painful and self-defeating it can be in not allowing ourselves to be vulnerable. At the very least, most of us can relate with the inner-conflict that occurs when we want to reach out to someone, but don’t out of the fear of feeling vulnerable – maybe it’s asking someone on a date, maybe it’s calling an estranged family member or loved-one to try to patch things up, or maybe it’s sharing one’s true feelings with a good friend. I’ve struggled with all of these – and continue to at times! – but what I’ve learned is that while there’s always the risk of the other person not being receptive, there’s also the more likely possibility that the other person will be receptive. And, the real reward in this process of overcoming our fears of vulnerability is that we’ve at least had the integrity to act on our true feelings, with sincere intent, living openly in every way – and that’s liberating, regardless of the final outcome.

3 thoughts on “The Glory of Vulnerability”