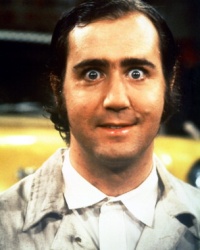 The late entertainer, Andy Kaufman, was brilliant – but not as the “comic” that most labeled him. Rather, Andy Kaufman was brilliant as a person, knowing that self-assurance and perseverance always succeeds over any seeming roadblocks or ignorance by others, that no one individual could defeat his grand purpose in life as a great entertainer.

See, in many ways, although now known as an iconic genius in comedy and performance art, Kaufman faced a lot of ignorance in his time toward his “performances” and personality. In fact, he was so different, so seemingly outrageous at times, that a lot of people outright hated the guy. But, Kaufman simply didn’t care. Even when Kaufman’s material bombed, he kept doing it night after night anyway, wisely ignoring criticism because he recognized his own grand purpose even when others didn’t.

What we now know is that despite the critics of his time, Kaufman’s self-assurance was right – his craft was genius, leading the way for new forms of entertainment that are now mainstream, 35 years after Kaufman began befuddling audiences with his uniqueness.

Kaufman died of cancer in 1984, at the age of 35. And, beyond his now-recognized place in entertainment history, his legacy is one that we all can learn from: When we truly know who we are, and know our grand purpose, any ignorance by others is inconsequential – that is, no one can thwart our power to ultimately succeed.

As those with disabilities, we all need a bit of Andy Kaufman in us – that is, a self-assurance that no matter what others toss at us in the form of ignorance, it rolls right off us, and we keep going on to our grand purposes.

If you think about the most common instances of ignorance that we face today as those with disabilities, they’re usually on very small, inconsequential levels. You might roll up to a counter in a coffee shop with your spouse, and the Coffee Captain may ask your spouse what you’d like, rather than speaking directly to you. And, in the typical living-with-disability model, it would be easy for you to become personally offended, take it to heart, feeling outraged and defeated that someone’s seemingly dismissed you because of your disability. But, in the whole scheme of your life, does it really matter toward your grand purpose if the Coffee Captain is ignorant or uncomfortable toward your disability?
Does it truly matter if he speaks to your spouse or you?

Of course not. In fact, if you’re secure with yourself, you wouldn’t hesitate to simply speak up, order your own Guatemala Casi Cielo cup of Joe, and go about the rest of your day totally unfaded. The Coffee Captain doesn’t know you, and maybe he’s never known someone with a disability, so why would you personalize the experience in any way if you’re secure with yourself and empathetic toward others? Order your coffee, cut Mr. Coffee Captain a break, enjoy your Java, and get on with accomplishing your own goals for the day.

In my own life, I, of course, often encounter ignorance toward my disability. Although others who act with ignorance toward me typically don’t bother me at all, it is interesting that my family and friends around me get far more offended by others than I’d ever expect. My sister is the worst, totally hot-headed when she thinks that others are acting with ignorance toward my disability. I remember being in a restaurant with my sister, and every time that the waitress tended to us, the waitress yelled to me as if I were deaf. As dinner went on, my sister became more and more angry. “What’s her problem, talking to you like you’re deaf?” my sister asked me, rhetorically.

Finally, the waitress came back, and yelled at me very loudly, “Would you like desert?”

“You don’t need to yell – he’s not deaf!” my sister snapped back.

The waitress looked startled, her body tightening, looking toward me with immediate concern.

I put my hand on the waitress’ elbow, and said calmly, “Miss, you can talk to me as loudly as you like. Any woman as cute as you, offering me desert, is marriage material in book.”

The waitress put her arm around me, and said quietly, “Honey, I’ll get you whatever desert you wish – it’s on the house.”

Truly, if my sister hadn’t raised the issue, it would have been equally fine by me if the waitress talked loudly to me all night. My goal was to have a nice dinner, not to try to educate and change a stranger. And, this is where many with disabilities get stuck in life: They feel the need to correct and educate every stranger who acts with ignorance toward disability – at the grocery store, at the dinner party, at the bank, and on and on – and end up doing little more than derailing their own pursuits, burying themselves in unnecessarily negative situations.

Surely, disability awareness is great, and we should all embrace groups and individuals open to learning more about those with disabilities – I personally speak to countless groups regarding disability awareness. Yet, the world’s a big place, full of countless individually ignorant, rude people, and getting caught in the emotional trap of constantly confronting others out of anger and frustration simply wastes your own time. Instead, concentrate on fulfilling your own grand purpose – as a parent, lawyer, farmer, entertainer, whatever – and leave those who are ignorant or rude to straighten out their own lives. If an opportunity arises to make an embracing gesture – as I did with the waitress – that’s great. But, don’t make trying to straighten strangers’ ignorant or rude attitudes your mission in life – let them go, and you focus on accomplishing your own grand purpose.

The next time that you encounter ignorance toward your disability, don’t get angry or flustered – let it roll right off of you. Remind yourself to have empathy toward people of seeming ignorance – you don’t really know where they’re coming from in their actions, so give them the benefit of the doubt. Remind yourself that many people’s reactions of ignorance usually reflect their own perceptions, not you as an individual, so don’t take them personally. And, most importantly, remind yourself of, I know who I am, I know my grand purpose in this world, and I’m not bothered by any individual treating me with seeming ignorance – I hope that they learn in their own time, but I’m not giving up my life’s focus in order to confront every form of ignorance that I encounter throughout my busy day.

Andy Kaufman knew that his power was in his difference, and he refused to let anyone strip him of it. You’re power is also in your difference – the entirety of your person, disability and all – and when you feel the seeming ignorance of others trying to strip you of that power, just smile, knowing that you’re self-assured, and go on to live your grand purpose. After all, why waste your time trying to change individual instance of ignorance, when you can ultimately influence the greater good of many with your own life’s iconic work.