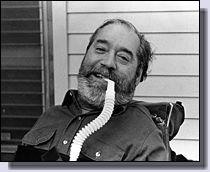 In honor of the 18th anniversary of the Americans With Disabilities Act, I was asked to give a speech recounting how far we’ve come as those with disabilities. And, when I looked back at the origins of the disability rights movement, I realized that it all came down to one, all-encompassing theme: Personal accountability toward disability.

Ed Roberts, a gentleman who I had the pleasure of meeting several times while I was growing up, has been called the father of the disability rights and the independent living movements. Contracting polio in the early 1950s as an adolescent, Roberts was required to spend most of his time in an iron lung. As if the severity of his disability wasn’t challenging enough, Roberts experienced it in an era when there simply was no such thing as disability rights or awareness.

However, at some point, Roberts made a bold move, a shift in the way that he viewed his own humanity. Roberts realized that it was solely up to him to make the most of his life, irregardless of the cards seemingly stacked against him – that is, he realized that it was up to him to move his life from merely surviving to truly thriving. To accomplish this, Roberts did what we all must do in order to succeed: He assume full accountability for his disability – and, ultimately, for others with disabilities, as well.

Roberts applied to the California Department of Vocational Rehabilitation for college tuition, and when the agency denied him, stating that he was too disabled to ever productively work, he assumed accountability for his disability by not accepting the way he was being viewed, suing the agency, and won. When Roberts applied for admissions to the University of California at Berkeley, and the Dean proclaimed, “We’ve tried cripples before, and it didn’t work,” Roberts assumed accountability for the ignorance of others toward disability, fighting his way into admittance, living in his iron lung in the campus infirmary while studying to his Bachelor’s degree, going on to a Master’s, then a PhD. Candidacy – a newspaper of the time published an article on Roberts, with the headline, “Hopeless Cripple Goes to School.” When Roberts found the city of Berkeley inaccessible to wheelchairs, he assumed accountability for wheelchair access, lobbying and winning to have among the first curb-cut ramps in the nation installed. And, when Roberts realized the injustices of hundreds of thousands of others with disabilities being denied access to education, employment, housing, and other essential liberties, he assumed accountability for all with disabilities, and co-founded the nation’s first Center for Independent Living, going on to serve as Director of California’s Department of Rehabilitation, building it up to 2,500 employees and $140 million annual budget during his tenure.

Among the lessons that I long ago learned from life-changing examples like Ed Roberts is that accountability isn’t a trait that we should look for in others, but it’s a requirement that we must place upon ourselves, that we can’t settle for merely surviving, but must propel ourselves toward truly thriving – again, especially for those of us with disabilities.

Now, some might argue that the reason why some with disabilities seemingly lack accountability is because remaining social barriers toward disabilities prevents it, that it’s a direct cause-and-effect relationship. After all, how can those with disabilities be accountable if employers won’t hire them , or landlords won’t rent to them, right?

Yet, this is where our ultimate accountability comes in. It doesn’t matter what barriers are against us – we must hold ourselves personally accountable for our disabilities, to work our ways around obstacles. Ed Roberts didn’t write himself off when the rest of society tried – he didn’t use the clear barriers of disability as an excuses not to move his life forward. And, it’s this outlook that’s intrinsic in all who succeed with disability, where they simply don’t care how physically disabled they are, or how others view them, or what obstacles or challenges that they face – they simply hold themselves accountable to do what it takes, whenever it takes, to get the job done. It’s my disability, and at the end of the day, I’m solely accountable for it.

I write and speak of these types of empowered topics all of the time these days, and I hear from people who to tell me why accountability shouldn’t apply to them:

Fatigue makes my symptoms worse, so the harder I try in life, the worse I get.

I don’t live in an area with resources for those with disabilities, so I’m stuck.

My progressive disability takes a big psychological toll, so it’s not as easy for me to move forward as it is for others.

I’m so severely disabled, not having speech, all of which makes it impossible for me to go to college or get a job.

I encounter such reasoning every day, and my argument to such people is a blunt: If someone like Ed Roberts could assume absolute accountability for his life – with polio, dependent upon an iron lung, living in an era prior to disability rights – there’s not a darn excuse on the planet why you and I shouldn’t assume full accountability for our lives. What’s more, beyond Roberts’ stellar example, it’s not difficult to point to countless individuals with far more involved disabilities than most of our own, who live phenomenally successful lives – demonstrating that our abilities to move our lives forward with education, career, family, and community, is liberated by our humanity, not restricted by our disabilities.

As for me, it’s interesting in that when people know me from my public roles – from reading me and seeing photos of me, but never meeting me in-person – they sometimes note being surprised by “how disabled I am” when they finally meet me in-person. While on the surface, it is a bit odd for someone to say to me, “You know, from seeing all that you do, I never would’ve guessed that you’re so disabled in real life,” I’m actually not offended by it, but flattered by it, as such words suggest to me that my accountability is shinning through. I would never be as direct as evangelist, David Ring, born with a disability, who puts his audiences on the spot, asking them, “I have cerebral palsy; now, what’s your problem?” However, I hope that I set a standard of personal accountability in my own life that suggests Ring’s precise question to those who I reach and meet.

Toward my own accountability, if, at this writing, I use only the past three weeks of my schedule as a barometer, I’ve covered a lot of ground. In addition to my full-time day job in the mobility industry, and my dedication to supporting the WheelchairJunkie online community around the clock, I’ve coordinated and hosted a disability event, appeared on live morning television, delivered two keynote talks, and worked at night on a rehab text book that I’m co-authoring and editing – to name a few accomplishments. And, along the way, as always, I’ve dealt with the physical realities of my disability, and encountered stereotypes and ignorance from others regarding it from time to time. No, my accountability doesn’t protect my from hardship, trials, and setbacks ushered in by my disability, but it does move me forward in spite of them – and it’s my sense accountability to move my life forward that I focus on every day, irregardless of my disability level or the obstacles that I encounter.

Maybe you’re not as optimistic as I am, where you don’t think that you have the power at this moment to catch the curve balls that life sends you, polish them up, and toss them back twice as hard. Maybe you feel like disability has held you back, knocked you down, or robbed you. Yet, in even the bleakest moments, simply reminding ourselves that we’re personally accountable for our disabilities – that it’s solely within our capabilities to move our lives from merely surviving to truly thriving – changes our lives, empowering us to begin seeing that success is within our reach. Again, if someone like Ed Roberts could change his life in the 1950s, living with polio, living in an iron lung, then there’s nothing that we can’t accomplish today as long as we hold ourselves personally accountable for our potentials in life, no matter disability or otherwise.

I suppose that it all comes down to one fundamental statement of ultimate accountability that each of us can make toward succeeding with disability: If Ed did it, so can I.